Fatherhood is trending on Netflix. No, seriously!

In addition to celebrating fathers and father figures last weekend, Netflix also dropped its new film, “Fatherhood.” The movie is based on a true story and stars Kevin Hart, who wanted the role so he could portray Black fathers in a unique way.

Not only have I seen many Black dads fight against the myth of absenteeism, but we often get a one-dimensional view of dads based on stereotypical gender of serving as providers and protectors. But they are so much more.

“Fatherhood” gives us a more supportive and nurturing view of dad hood: The crying, the hugging and loving side of dads.

Of course, Hart ain’t the only one portraying this. We found two Southern dads and their kids to talk about how they connect with each other.

And read all the way to the end to find out how you can better connect with yourself via a self-care course titled, “I AM JOY,” and how you can save a little money on it.

The adventures of Justin and Sophie 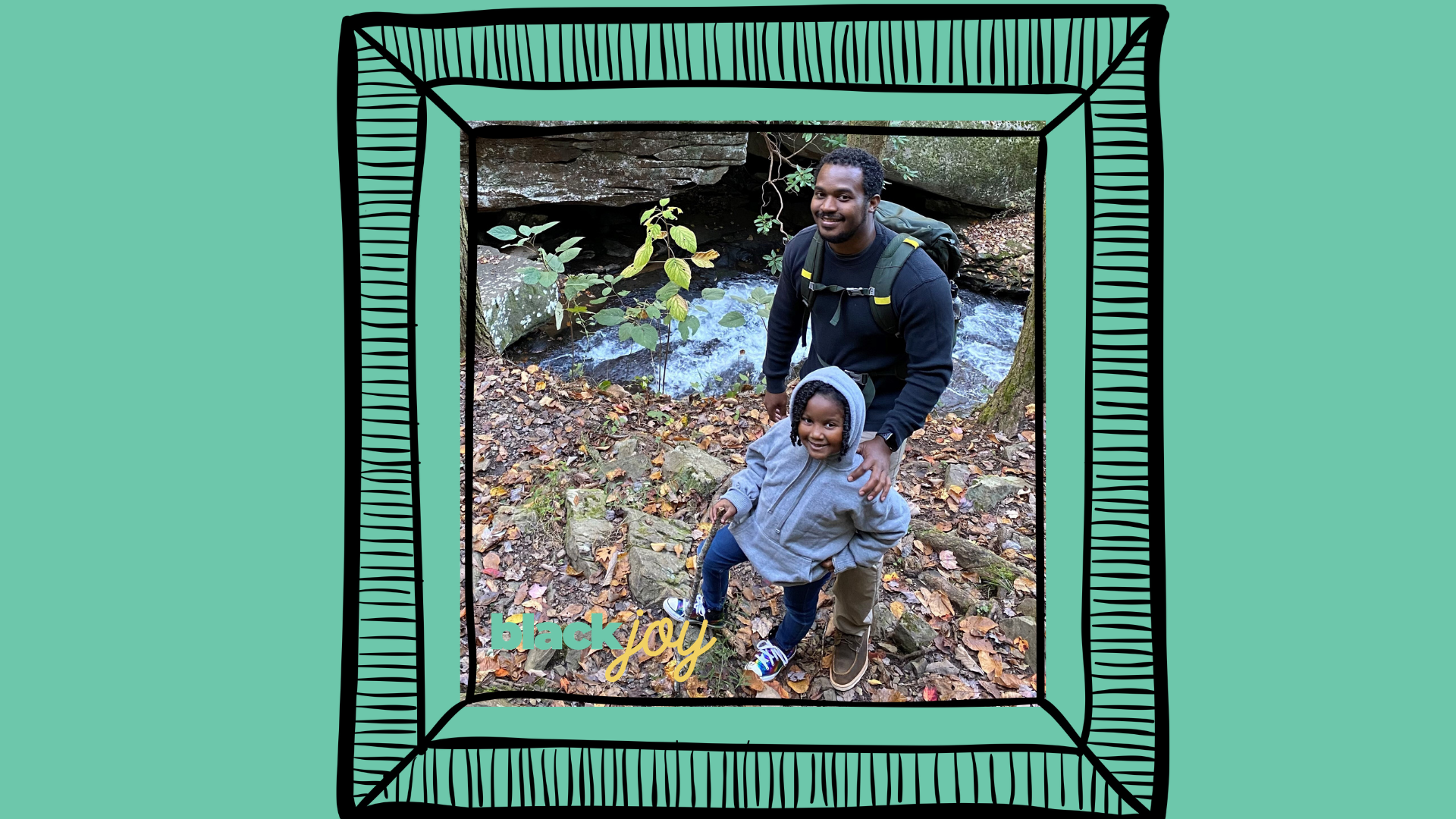 Justin Lawrence credits his parents for teaching him how to make the outdoors his playground. He had had plenty of spaces to frolic growing up in the Atlanta suburbs. Exploring mountain towns of Helen, Ga., and Gatlinburg, Tenn., and searching for waterfalls and wildlife were family favorites.

Now part of the #girldad gang in Montgomery, Ala., Justin is passing down those adventures to his daughter, Sophie, who is 7 going on 17, according to Lawrence. They are on a mission to visit all 21 of Alabama’s state parks (so far they’ve crossed eight off their list). Sophie is also filling a gallon jug with coins to raise money for her dream trip to see Alaska’s northern lights.

Lawrence knows Sophie won’t be young forever. So exploring the world together is his way of forging the foundation of their relationship.

“You only have so much time with your kids before they become a teenager and they’re no longer interested in you,” Lawrence said with a laugh. “So for me, it’s just more of a bonding time and creating that space in the relationship so that later on in life, we have that rapport where she can just really come and talk to me.”

Lawrence shared photos from a few favorite memories with us. 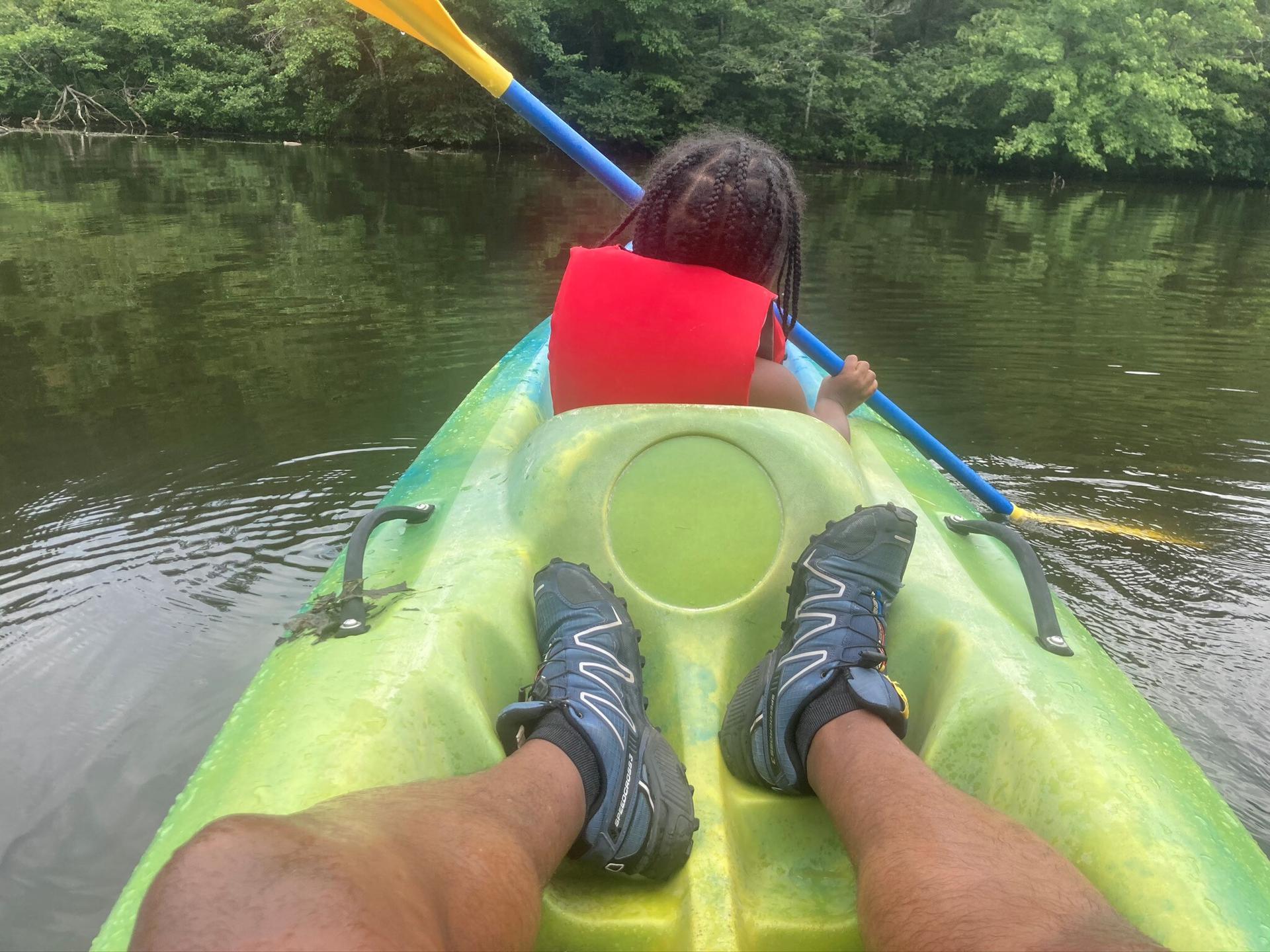 On Sophie’s first river kayaking trip, Justin says she was gung-ho about taking control of the boat. Witnessing his daughter’s self-determination was one of the greatest moments the trip. “It was just cute to experience to see all of that taken place on the water,” he said. 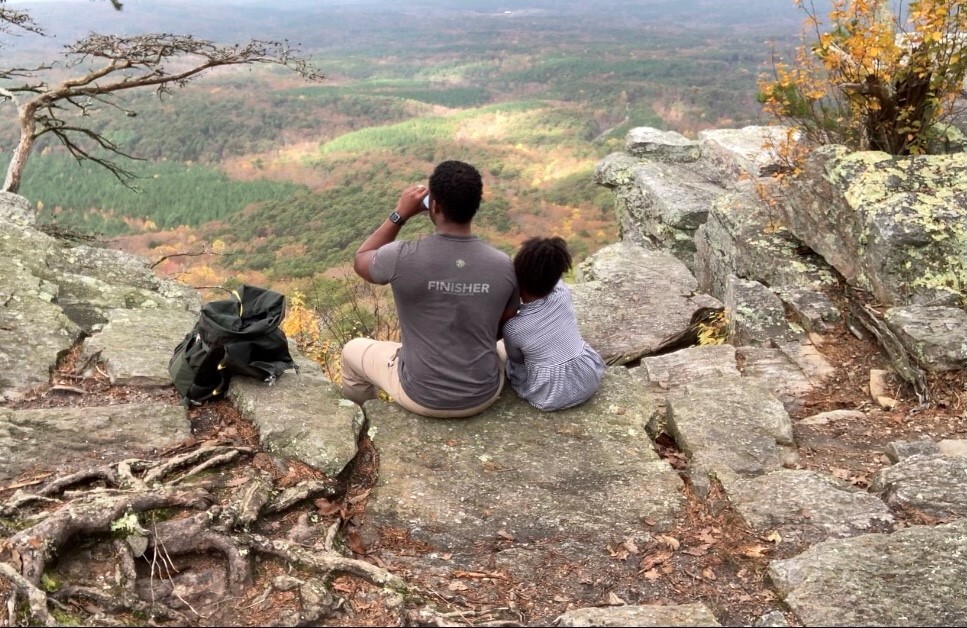 They’ve visited the park before dawn to see the fog clear and reveal the sunrise, to observe the foliage and “just hang out, play ‘I Spy’ and just have good conversations.”

Justin added: “We talk about everything under the sun. … I mean, sometimes when we go up there and we’re just there in complete silence. Just enjoying the view and the moment listening to the birds and the other animals up there. When I am up there, she teaches me patience – to slow down and take it easy.” 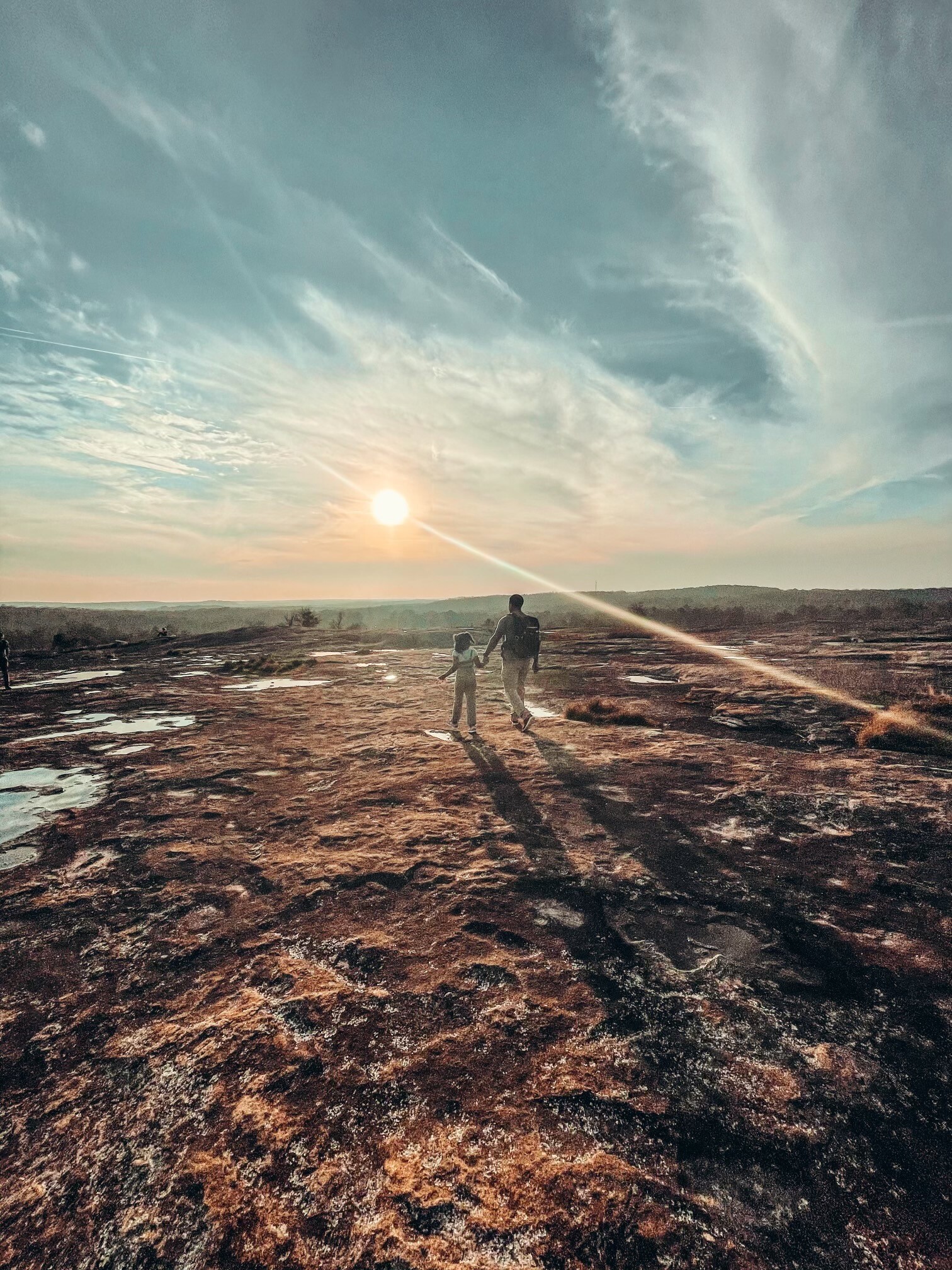 Captured by Justin’s sister, Tavia Lawrence, this was both Sophie and Justin’s first visit to the park, which is just outside of Atlanta. “We were discovering a place together and we went there right before sunset.”

“The biggest thing I want her to learn is be open to trying to explore new things. Life is about experiences and nature is a place of solace. I just want her to be firmly rooted in that.”

Sophie says the thing she loves most about her dad is that, “He’s fun to play with.” She smiles when he helps her when she falls on the trails. I took that metaphorically and it made me feel good that Sophie has a dad who always has her back. Bring on the tears! 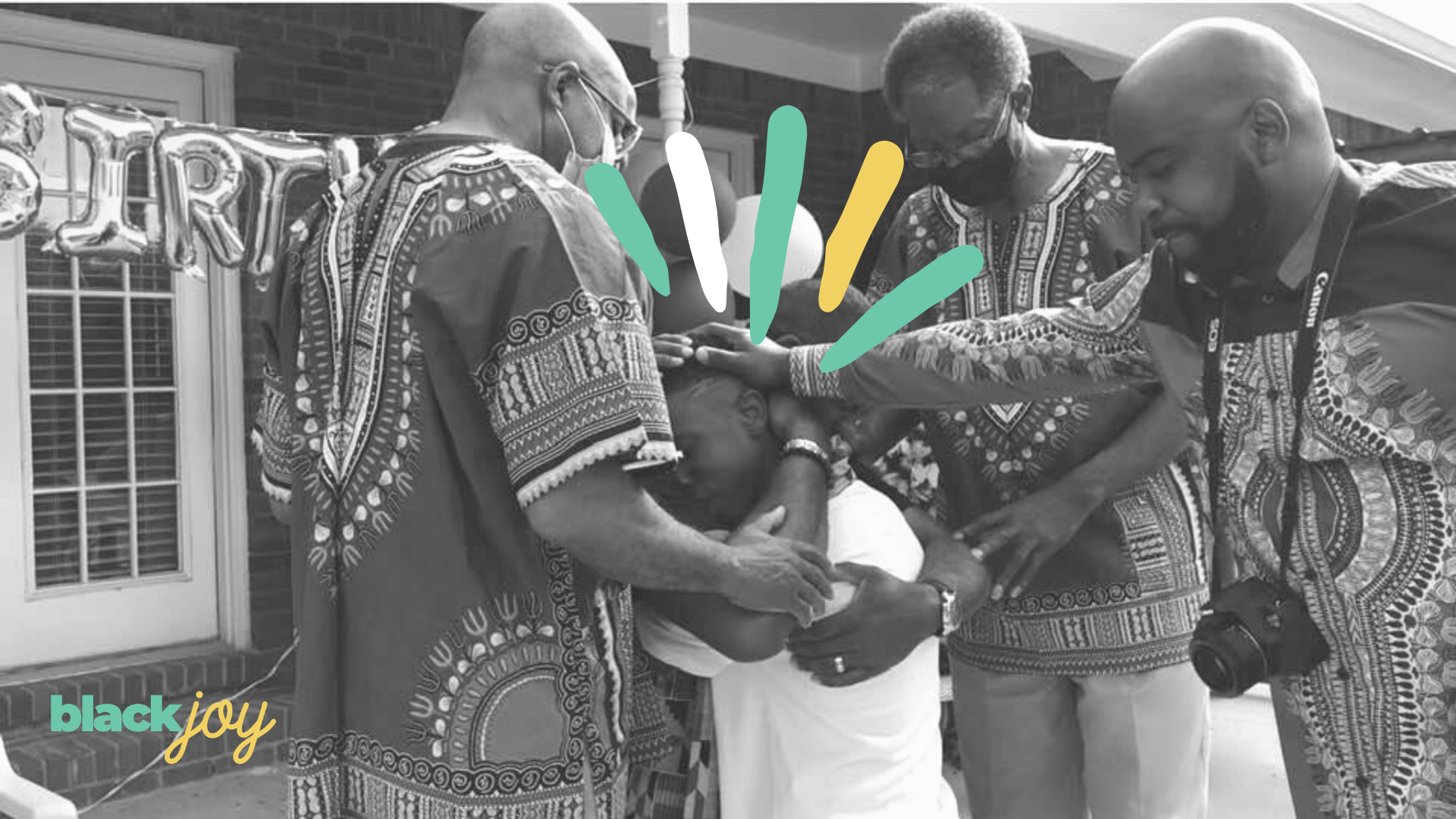 Pictures of Jerry Draine III’s great-grandfathers were placed on a table to remind him of the shoulders he stands on.

Tears spilled from Jerry Draine III’s eyes as both his father and father figures, such as his uncle and grandfathers, gave him advice and gifts that can be passed down to his own children in the future, like an African-themed stole where he can patch the initials of his ancestors and the men who are born after him.

Jerry Draine Jr. gave his son a few dog tag chain necklaces, including one that was passed down by his father.

When I saw the emotional photos from this ceremony, I knew I had to reach out to the Jerrys and talk about their favorite parts of this special celebration.

As a Black teen, what did you learn from your father figures during the ceremony?
Jerry Draine III: “They were telling me that, as a Black person, things are not going to be exactly the same out in the world. I have to walk through life and be able to go through certain things with maturity. I’m holding every ancestor that has brought me to this point, like Martin Luther King Jr. and anybody who was in my family. Everything they did, they brought me to this point.”

What was your moment of joy during the ceremony?
Jerry Draine Jr: “When we prayed over him as a group of fathers. That was definitely a powerful moment for us to transfer, in prayer, our feelings and ambitions for Jerry (Draine III). I really believe things are transferred in the laying of hands.”

What are you two learning from each other?
Jerry Draine III: “My dad is the type of person who carries a lot of joy in him, but he’s also a serious man. That’s something that I want to be able to do. Not only how he carries himself, but how he’s able to respond to certain people and things like that, so that they that he’s able to do, I want to do that when I grow up.”

Jerry Draine Jr.: “I learn a lot from Jerry all the time. I truly believe that, as parents, we don’t create seeds. We simply plant them. It’s not our job to make our children something they’re not. It’s our job to provide an environment where the seeds that God bless us with, we allow them to grow.

So you have to learn the seed. You’re gonna develop a tomato a different way than you do an apple. But the mistake that we make is to either not know that this is an apple versus a tomato or find out that it’s an apple and we’re set on transforming this into a tomato.” 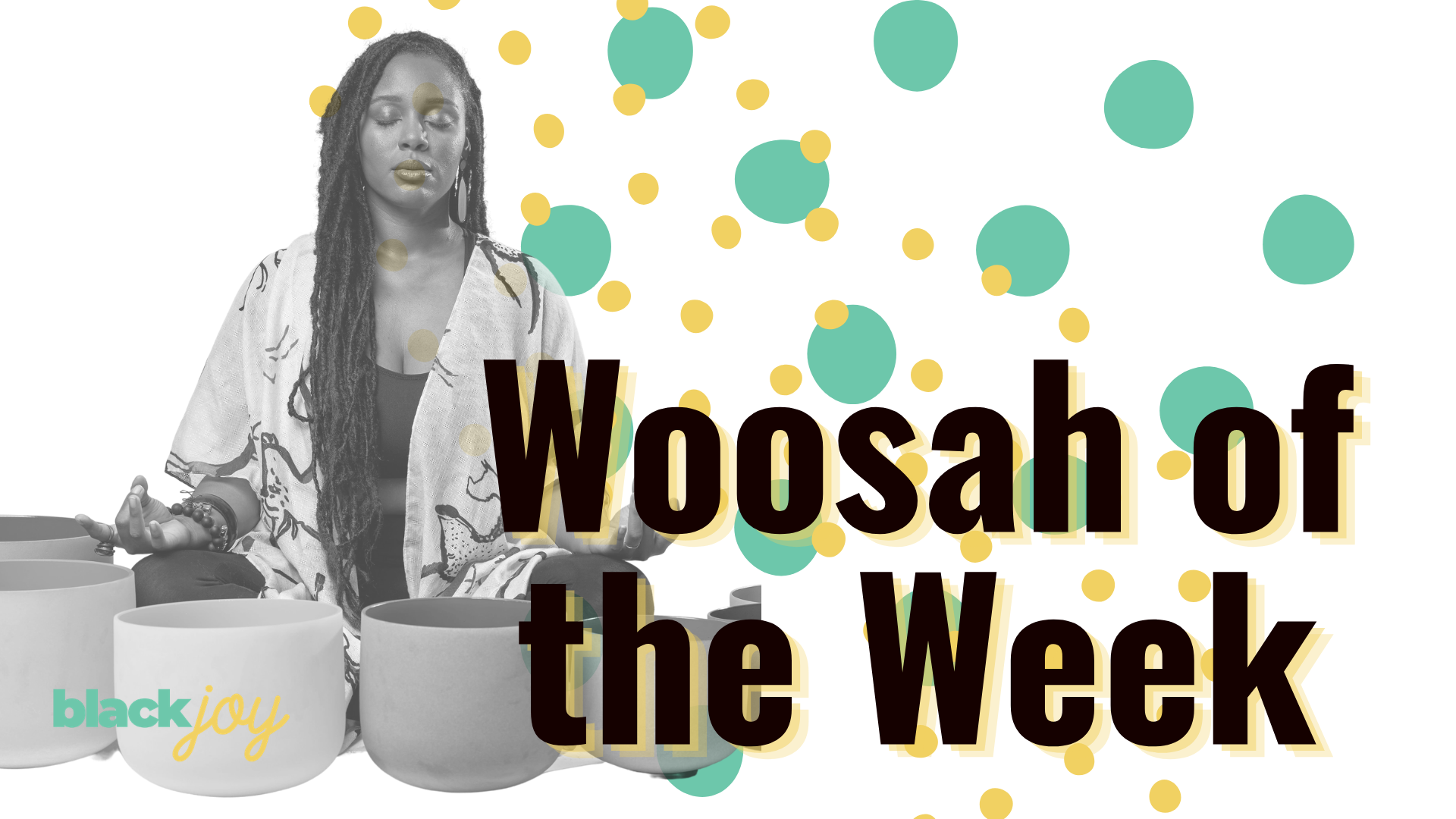 Going to shift gears here into what we are calling our weekly “Wooosah of the week!” with LeNaya Smith Crawford.

Crawford is a holistic healer and licensed marriage and family therapist in Atlanta. If you caught our Juneteenth convo from last week, you heard that sis cut us a deal for her four-part, self-paced course called “I Am Joy,” which teaches you how to cultivate joy for ourselves in different ways. If you use the discount code “BLACKJOY,” the price of the course will drop from $77 to $47.

I signed up last week and I’m sharing my experience with y’all hoping you will join me in finding more joy our lives.

Crawford gave viewers a couple of tips of cultivating that joy. I’m going to give you a sneak peek at two of them. You gotta sign up for the course for the rest.

· Meditate on your version of joy: After going through the different barriers of joy, Crawford eases into a guided meditation and helps you visualize what joy looks like for you: Where are you? What are you doing? How does your soul feel?

I think this is helpful for people who may have been lost in a funk for a while. When you and your mind are getting into it, you’re so focused on surviving that you forget what thriving feels and looks like.

After the meditation, I felt like I got clues of where my joy resides and what type of environment I need to cultivate that space for me. I can see outdoors, sunshine and laughs with friends in my future!

· Gratitude! Gratitude! Gratitude: Crawford said finding a way to express gratitude daily is an evidence-based practice. Meaning: it’s proven to help you shift your focus from what you don’t have to what you do have. By making a habit of this, you’re changing your mood as you focus on positive experiences.

So I am challenging myself to list three things that I am grateful for every day. Here’s today’s list:

· I am grateful for the flowers that bloom on my porch.

· I am grateful for my friends who invited me on their beach trip next week.

· And I am grateful to share another week of Black Joy with you and I hope you cultivate some joy for yourself this weekend.

See you next time!