Roy Wood Jr. to Jimmy Fallon: ‘I’ve never been more proud to be from Birmingham’

Comedian Roy Wood Jr. joined “The Tonight Show Starring Jimmy Fallon” Wednesday to talk about being back in Birmingham and the removal of the Confederate monument from Linn Park.

The comedian, who grew up in Birmingham, returned home from New York. During the segment, he told Fallon that he and his family stayed in New York for as long as they could before they made the decision a few weeks ago to drive 16 hours to wait out the nationwide coronavirus stay-at-home orders in Alabama.

“So, that’s where we are now. Good ol’ Birmingham,” he told the late night host.

When Fallon asked him about life in Alabama over the past few weeks, Wood said recent events in the city have reminded him about the state’s sense of community, including the protest for justice in Birmingham at Kelly Ingram Parkin the civil rights district and demonstrators’ efforts later that evening to remove the Confederate Soldiers & Sailors Monument from Linn Park.

“This is where Birmingham, to me, is just such a different place to be from,” said Wood, explaining that the city is rich with justice and people trying to fight for it.

“So, everybody is at the park for the peaceful protest. And a good friend of mine — comedian Jermaine “FunnyMaine” Johnson — he says to the crowd, “While we’re down here, why don’t we try to take down that Confederate monument over there” playfully summarizing Johnson’s Sunday afternoon call for protesters to join him in the park at 7:30 p.m. to tear down the 52-foot-tall stone structure.

“So, this is how ready Birmingham is to be done with racism,” Wood said. “Somebody in downtown Birmingham pulled up in a pickup truck with a rope and tried to pull down a million-ton Confederate monument…with a pickup truck! That’s how tired we are,” Wood exclaimed as Fallon laughed. “It didn’t work…It didn’t work.”

This took professionals crews 36 hours to complete. On Sunday, someone tried to take it down with rope & a pick-up truck.

Saw the photos this morning, but had to see for myself. The crews finished the job, and the base of the Confederate monument in Linn Park has been demolished. 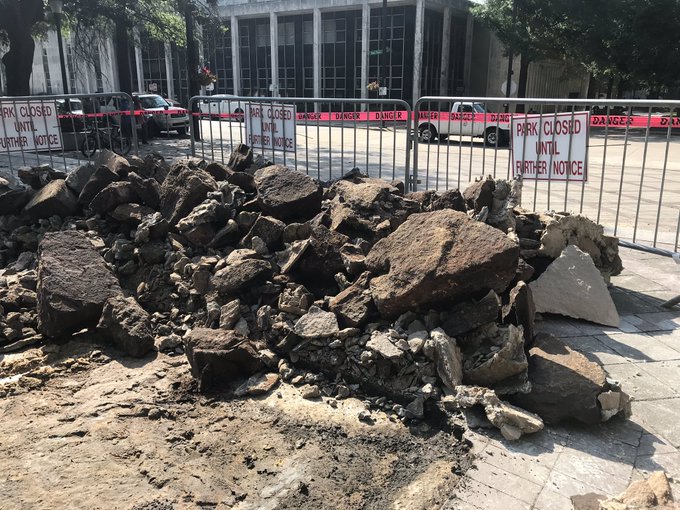 161 people are talking about this

Wood then recounted how Birmingham Mayor Randall Woodfin came out to talk to the demonstrators.

“He spoke with Jermaine and he spoke with the crowd and said give me two days to get this done. And the mayor got it done in one. And the Confederate monument is down and that came as a result of people, you know, coming together. There was a lot of stuff that happened after that in the streets of Birmingham, no different from everywhere else,” Wood said, alluding to the hours of mayhem that ensued as some people in the crowd left Linn park and spilled into downtown Birmingham, shattering windows and damaging buildings.

The comedian explained to Fallon that the next morning, he and a crew of people went out to the civil rights district to assist businesses in the area with cleanup efforts, including Adams eye care, owned by Dr. Juanakee Adams.

”There’s a black woman optometrist, Dr. Adams, and Dr. Adams’ (office) is one of the places that got torn up and myself and a gang of other locals, we just showed up and we just started cleaning.”

The group shoveled glass and people of all ages and races brought food and music, said Wood, describing the camaraderie.

“A homeless person even came out and donated their time,” he said. “So, to be able to see that sense of community here. That was dope.”

Wood told Fallon another outstanding marker of Birmingham’s solidarity was the money White Clergy for Black Lives Matter raised to help the city pay for the legal costs of removing the monument, which violated state law. The group decided to donate the remaining funds to Faith in Action.

”That’s what the city of Birmingham is about,” said Wood. “I just think there’s just a wonderful show of initiative happening here in the city and I’ve never been more proud to be from Birmingham than in the past 72 hours.”

Later on in the segment, Wood explained why he hates the rhetoric surrounding “protesting” vs. “looting,” as he described how racism and systemic oppression in the U.S. is like a kettle pot that has been “sealed shut and put on the stove for centuries.”

“And every time the kettle pot starts boiling a little bit, the conversation is about ‘why is the steam coming out?’” said a visibly irritated Wood. “Stop talking about that and take the pot off the stove. That’s the only conversation that needs to be had. And I think that’s the conversation lost in the midst of everything that happens.”